Jump To:
From Wikipedia, the free encyclopedia

Map of Washington, D.C., with Southwest Waterfront highlighted in maroon.

Southwest Waterfront is part of Pierre L’Enfant‘s original city plans and includes some of the oldest buildings in the city, including the Wheat Row block of townhouses, built in 1793, and Fort McNair, which was established in 1791 as “the U.S. Arsenal at Greenleaf Point.”

After the Civil War, the Southwest Waterfront became a neighborhood for the poorer classes of Washingtonians.

The Waterfront developed into a quite contradictory area: it had a thriving commercial district with grocery stores, shops, a movie theater, as well as a few large and elaborate houses (mostly owned by wealthy blacks). However, most of the neighborhood was a very poor shantytown of tenements, shacks, and even tents. These places, some of them in the shadow of the Capitol, were frequent subjects of photographs that were published with captions like, “The Washington that tourists never see.”

In the 1950s, city planners working with the Congress decided that the entire Southwest quadrant should undergo significant urban renewal — in this case, meaning that the city would acquire nearly all land south of the mall (except Bolling Air Force Base and Fort McNair), either through voluntary purchases or through the use of eminent domain; evict virtually all of its residents and businesses; destroy many of its streets, and all of its buildings and landscapes; and start again from scratch. 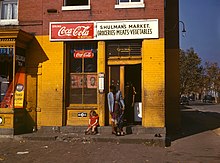 Shulman’s Market (ca. 1942), one of many businesses that once operated in Southwest Waterfront.

There was some opposition to the plan, notably from the Southwest Civic Association, because of its emphasis on building luxury housing rather than supplying low and moderate income dwellings to replace the homes slated for demolition. John Ihlder, the director of the Alley Dwelling Authority, also spoke out about the plan’s failure to provide enough affordable and public housing. However, the redevelopment plans, which had been crafted by architects Louis Justement and Chloethiel Woodward Smith and which included modernist buildings, ample green spaces, and plenty of parking, were popular among many city residents and officials, and their appeal eventually won out. Only a few buildings were left intact, notably the Maine Avenue Fish Market, the Wheat Row townhouses, the Thomas Law House, and the St. Dominic’s and Friendship churches. The Southeast/Southwest Freeway section of Interstate 395 was constructed where F Street, SW, had once been, separating the quadrant’s business district from the residential Waterfront neighborhood.

The heart of the urban renewal of the Southwest Waterfront was Waterside Mall, a small shopping center/office complex mostly occupied by a Safeway grocery store and satellite offices for the United States Environmental Protection Agency. The Arena Stage was built a block west of the Mall, and a number of hotels and restaurants were built on the riverfront to attract tourists. The now closed Southeastern University, a very small college that had been chartered in 1937, also established itself as an important institution in the area.

The residential aspect of the project began with a large apartment complex and park called Potomac Place, located on 4th Street between G and I Streets. When Nikita Khrushchev visited Washington in 1959, he pointed out to President Dwight D. Eisenhower the extremely poor dwellings that stood on the way from Bolling Air Force Base (where Khruschev had arrived in the city) to the downtown area; Eisenhower, in response, ordered their driver to pass by Potomac Place in order to show the Soviet Premier that the nation’s capital was working to assist its poorer citizens.

Due to its history of urban redevelopment, most of the Southwest Waterfront neighborhood is composed of large cooperatives or condominiums, often containing both townhouses and apartment buildings, and most are rare examples of Modern Architecture in Washington, D.C. River Park features townhouses and a highrise building a unique modern glass and aluminum design by the award-winning architect Charles Goodman. Tiber Island, which was designed by noted architects Keyes, Lethbridge and Condon and built in 1965 in a pinwheel shape with a large courtyard and town houses in the quadrants, won the American Institute of Architects award for Multi-Family Residential design in 1966. Carrollsburg was completed in 1967 and developed as a companion piece to Tiber Island by the same architects.

Titanic Memorial located beside the Washington Channel in Southwest Waterfront

In 1972, the Titanic Memorial was moved to the Washington Channel, near Fort McNair in Southwest Waterfront.

The Washington Metro built the Waterfront Metro station on its Green Line and opened it in 1991.

Starting around 2003, the Southwest Waterfront began gentrifying. A number of the neighborhood’s apartment buildings began extensive renovations and condominium conversions. Residential and commercial developers began to take a more serious interest in Southwest with the announcement in 2004 that the city would build the new Washington Nationals baseball stadium just across South Capitol Street from Southwest. The Southwest Waterfront has now been earmarked as the site of the next wave of DC redevelopment. Large development projects currently underway or in the planning stage include Waterfront Station, a mixed retail-commercial-residential development at Fourth & M Streets SW; the expansion and redesign of Arena Stage; and the radical redesign and overhaul of the waterfront itself, to include residences, office space, hotels, and retail establishments.

Rendering of The Wharf, courtesy of Perkins Eastman

On March 19, 2014, master developers PN Hoffman and Madison Marquette broke ground on the massive redevelopment of D.C.’s Southwest Waterfront into a mixed-use complex called The Wharf. Stretching across 24 acres of land and more than 50 acres of water from the Municipal Fish Market to Fort McNair, The Wharf, when complete, will feature more than three million square feet of residential, office, hotel, retail, cultural, and public uses including waterfront parks, promenades, piers and docks. Phase I of the development is set for delivery in Fall 2017.